You can easily root Nexus 4, thanks to Chainfire – one of the most popular hackers and developers at XDA. Chainfire has released a rooting tool for Nexus 4 that allows you to root Nexus 4 with a single click. Follow the detailed Nexus 4 rooting instructions below to without any risking to bricking your device.

Nexus 4 root process will first try to unlock bootloader of your Nexus device, if you’ve not already. Which means it will wipe all the data on the device. If you’ve already unlocked your Nexus 4 bootloader, it will simply root your device without wiping your data. Follow the preparation steps mentioned below to correctly root your Nexus 4 on Android 4.4.2 firmware.

Disclaimer: While this method of rooting Nexus 4 CF-Auto-Root is safe and tested, follow these instructions at your own risk. We cannot be held responsible if anything goes wrong.

How to Root Nexus 4

1. Download the CF-Auto-Root-mako-occam-nexus4.zip file from here and extract its contents.

2. Now turn off your Nexus 4 and put it in Fastboot by simulteneously pressing the volume down + power buttons. When you see the “Start” text on the screen, release the button. You’re now in Fastboot Mode.

3. Now connect your device to your computer via USB cable and let the drivers installation to complete.  Now go to the CF-Auto-Root-mako-occam-nexus4 folder (Step 1) and launch the “root-windows” file. 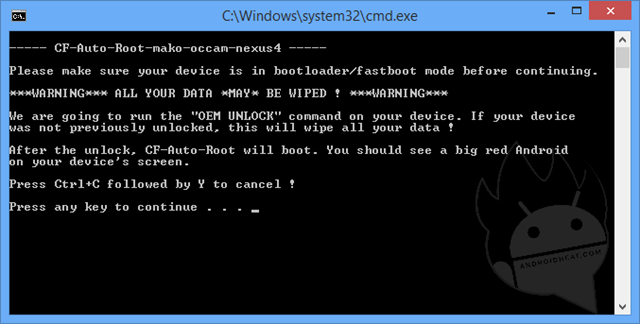 4. Now press any key to begin the rooting process. First it’ll unlock bootloader of your device if you have not already unlocked it and then it’ll install the root. A red Android should appear on the screen of your Nexus 4 after a restart. 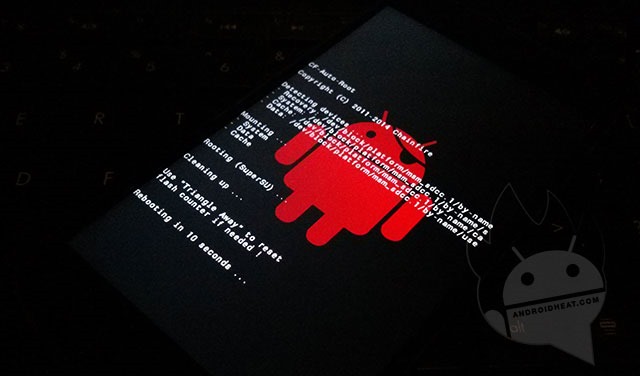 It may take a minute or so for the Red Android to appear. If it doesn’t show up at all, there may be a problem. 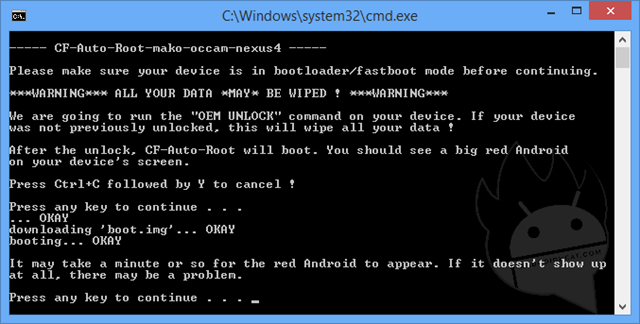 5. Your phone will boot up normally after the completion of root. You may now disconnect it from computer and check if SuperSU application has been installed. You should find it in app drawer. If you don’t find SuperSU icon in your app drawer, you should repeat the root process.

That’s it, you’ve successfully rooted your Nexus 4 with CF Auto Root tool. This should enable you to flash any custom ROM of your choice.