How to unlock Nexus 5 bootloader

Step 1
First of all you need to setup and install Android SDK so that you can use adb and fastboot commands. Download the latest Android SDK from Google, unzip the file somewhere in your computer (C:\ directory is desirable) and then go into the platform-tools folder where adb and fastboot files should be located. Open a command prompt from within there (in Windows, hold down the Shift key and right click anywhere in platform-tools folder and choose “Open command window here”).

Step 2
Make sure to enable developer options and then enable USB debugging. Connect your Nexus 5 to your computer. You’ll need to allow USB debugging access (make sure to check the box).

Wait for the bootloader screen to appear (big Android robot with START). You can confirm whether fastboot has detected the device or not by using the following command:
fastboot devices

Step 4
Once your device is in fastboot mode, wait until any automatic drivers installation is performed. Now type:
fastboot oem unlock

Step 5
A bootloader unlock confirmation page will appear. Use Volume Up to highlight “Yes” and Power button to select it.

You phone will be formatted (erased) and then bootloader will be unlocked. Now you should be on the bootloader screen showing “Start”. Press the power button to reboot it. If everything went right, you should see an unlock icon during the reboot.

That’s it! your Nexus 5 bootloader in now unlocked and it’s ready for the custom recovery, custom ROM, root and other hacks and modding goodness. 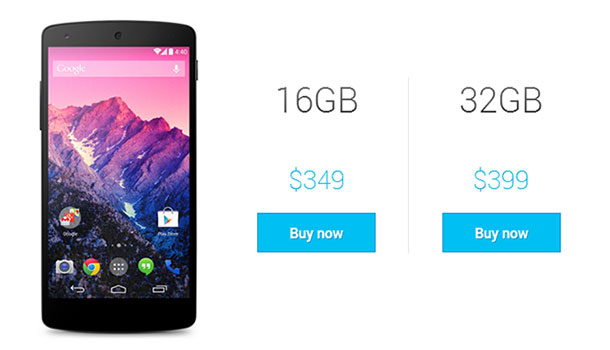